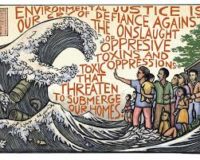 Environmental justice breaks down and re-imagines a system that is structured around inequalities where people are disadvantaged based on social categories, such as race, socioeconomic class, and gender (Moore 2). It is stated that residents of the U.S have the right to clean air, clean water, and safe drinking water according to the Environmental Protection Agency’s laws and regulations. However, this is not the case as it is not a given for many residents of the U.S, who fall under the underrepresented/minority umbrella (Moore 1). This has created the Environmental justice (EJ) movement, which is the fight for rights to have a healthy living style in relation to the natural environment around us (Logan 741). One of the key points is the reaction and aid that comes from the government when a community faces natural disasters or deals with toxic waste disposal; there is a clear difference in the treatment of a minority community versus a white community. The EJ movement, although mostly led by underrepresented members, is the fight for environmental justice for all people of all backgrounds.

A group that has been involved with the EJ movement and fighting for their justice, is the poor victims of Hurricane Katrina. It was long before Hurricane Katrina hit, that there were multiple petrochemical complexes in the areas that poor African-American communities were located (Pastor 21). Therefore when Katrina hit, there was a larger impact that affected their public transportation, increased risks of cancer, etc. It was distinguishable who was part of the the lower-income communities and those in the high-income communities. Those that were part of the higher-income community, had better disaster prevention methods, and were able to clean up the mess made by Katrina. The clean and safe environment they had before the storm was restored quickly, while the poorer communities struggled to even get rescued (Finney). Although is seems that wealth is the only factor that leads to the injustice, race plays a huge role as well. The middle class African-Americans, Latinos, and Asians are a prime example because although they have more money than the lower-income class, they still face injustice because of their race/ethnicity (Pastor 21).

Environmental Justice in the Agricultural Industry