Many widespread opinions shared by the general public are a result of the agendas that media sources such as television, movies, and written pieces translate through their communication style. The media plays a vital role in informing the public about both news and phenomenons, particularly in areas where audiences do not possess any pertinent knowledge or experiences. Thus, in areas where this is true, media outlets have a direct role in the construction of public beliefs and attitudes (Happer et al. 2013). The information that is chosen to be communicated in the various forms of media is put at the center of public interest and shapes any subsequent agendas or debates. In the case of the Great White Shark and how media outlets have shaped the public knowledge and opinions of the species, there is no more pertinent of an example than Steven Spielberg’s Jaws. 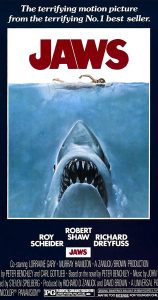 In 1975, a year following the release of Peter Benchley’s novel Jaws that was about a rogue shark that terrorized a small seaside community, Steven Spielberg’s film of the same name was released (Beryl, 2012). The film garnered immense amounts of attention and subsequently resulted in what had been an unprecedented public response of both excitement and extreme fear. The film inadvertently created a series of false stigmas surrounding Great White Sharks and shark species as a whole from creating fictional narratives about sharks and representations of shark behavior including that the species are intentionally hunting people, that shark bites are fatal events and that killing individual sharks will solve the problem (Neff, 2015). These myths that subsequently arose following the release of the film were devastating in regards to the public perception of sharks. The in-depth account of the individual Great White Shark in the Jaws as well as other shark species as man-eaters” only reinforced the public psyche that sharks were “stalking, killing machines” (Beryl, 2012) 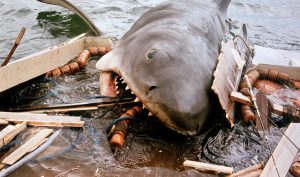 Jaws depicted sharks as a malevolent species via AMC

Each of the four attacks on humans from the Great White Shark in the film was fatal. In each case, the attack creates an essential element to the nature of human-shark interactions being that each will inevitably end fatally (Neff, 2015). Even when the victim was in the safeguard of a boat, the shark was successful in claiming the life of a human. Reinforcing that a shark bite or attack would be fatal was a common myth occurring throughout the film, however, is one that can be quickly undermined. Only 15 percent of confirmed unprovoked shark attacks that have been documented since 1958 have been fatal (Florida Museum, 2019). Jaws attempted to define Great White Sharks as a species that actively preys upon humans. However, the truth remains that these sharks often will mistake humans for other sources of prey, most commonly pinniped species. Shark attacks are most times not fatal because sharks will realize upon biting that they confused humans for another species of prey.

Jaws was released during a period of time when not much was known about sharks, particularly the Great White Shark. Benchley even admitted so following the popular responses to his novel (Beryl, 2012). The lack of scientific research on the importance of the species coupled with the newly developed widespread fear of the species had devastating repercussions for the Great White Shark. George Burgess, a shark biologist at University of Florida, affirmed that shark populations in waters surrounding the United States plunged after thousands of fisherman sought to catch and kill trophy sharks after viewing Jaws (Beryl, 2012). Furthermore, Burgess claimed that prior to the release of the film, shark species were regularly regarded as a pest or nuisance that ate the baits or catches of commercial fishermen (Choi, 2010). This example of speciesism further evolved following Jaws as the film made it appealing and somewhat sexy to go catch sharks and for fisherman to proudly document their haul.

HAPPER, C., PHILO, G.. The Role of the Media in the Construction of Public Belief and Social Change. 2013. Journal of Social and Political Psychology, North America, 1, dec.