Fear No More: Overcoming Stigmas for the Conservation of Shark Species 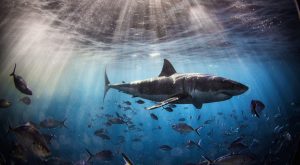 via The Nature Conservancy Australia

Sharks, particularly White, Bull, and Tiger Sharks, otherwise known as the “the Big Three”, are widely recognized as some of the most dangerous animals on the planet. With their intimidating feeding behavior and figure comes sinister and menacing associations. However, as an apex predator, the wide range of shark species found around the world’s oceans maintain a vital ecological role within a variance of ecosystems. The history of the public perception of sharks, most notably the Great White Shark, as a terrorizing threat to humans is a result of myths formed via media and a general fear of the ocean. This depiction of the sharks is a product of not only impressions made by films such as Jaws but is also a direct result of human nature and our lack of place in the ocean. Overcoming the false narratives created about sharks and understanding the importance of the species to the health of marine ecosystems is critical to conserving the apex predators of the ocean.

Ecological Importance of the Sharks

Human Relationship with the Ocean and Sharks

Carson, Rachel. The Sea Around Us. Oxford University Press, 1951.

HAPPER, C., PHILO, G.. The Role of the Media in the Construction of Public Belief and Social Change. 2013. Journal of Social and Political Psychology, North America, 1, dec.

Thompson, Michaela Jane. “Governing the Shark: Predators and People in the Twentieth Century and Beyond.” Dissertation Abstracts International Section A: Humanities and Social Sciences, vol. 78, no. 7–A(E), ProQuest Information & Learning, 2018.

US Department of Commerce, and National Oceanic and Atmospheric Administration. “How Much of the Ocean Have We Explored?” NOAA’s National Ocean Service, 7 July 2018, oceanservice.noaa.gov/facts/exploration.html.

US Department of Commerce, and National Oceanic and Atmospheric Administration. “How Much Water Is in the Ocean?” NOAA’s National Ocean Service, 1 June 2013, oceanservice.noaa.gov/facts/oceanwater.html.