The four categories of stakeholders defined by Mary English are risk losers, risk gainers, risk perpetrators, and risk managers (249-250). In the case of pangolin trafficking, it is vital to understand the motivations behind the actions in order to put an end to wildlife trafficking altogether. A baby pangolin, the risk loser in the case of their trafficking. Source: National Geographic Newsroom

For this scenario, the risk losers are most obviously the pangolins. While in many cases it is hard for people to recognize non-human beings as stakeholders, when viewing images of thousands of dead pangolins, innocently slaughtered, we instantly know who is the victim and who is the villain. In a case of decreasing population such as this, many of those who seem to be risk gainers will end up losing in the end. One wide use of pangolin meat and scales in both Southern Africa and Asia is in traditional medicinal practices. The Chinese pangolin is on the brink of extinction due to exploitation in Asia, which is driving wildlife traffickers to Africa where other pangolin species reside (Aisher 322). In traditional Zulu medicine, called “muthi,” pangolins are a key ingredient and are also relied on as a source of food (Pieterson et al. 171). While those promoting wildlife trafficking, the risk perpetrators, are motivated by greed and immorality, it is far more complex to look at an African tribe following tradition and assign them blame.

Risk gainers are even difficult to villainize in certain situations; poachers are no masterminds, looking to become rich off of blood money. They are poor men trying to support their families any way they can, and they also stand a lot to lose; the penalties for pangolin poaching in South Africa are severe, with Zimbabwe threatening a minimum jail sentence of nine years for a first offense (Pieterson et al. 173). To stop this manufactured extinction, the real perpetrators, the kingpins who run poaching rings and sell in markets to the unknowing public, getting rich off of ignorance and murder. 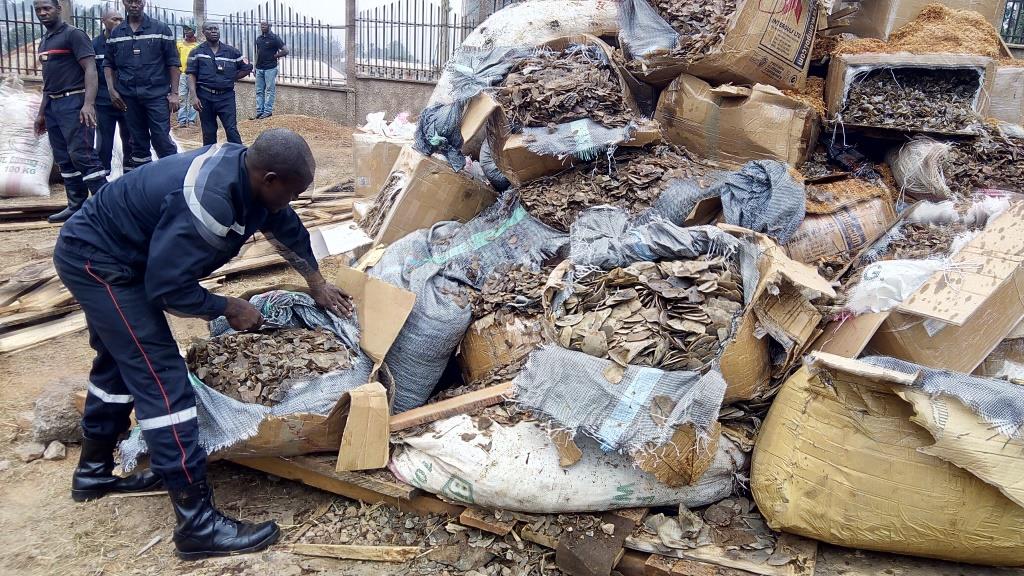 A shipment of pangolin scales intercepted and being burned. Source: WWF

Society itself must change in order to deconstruct the deeply rooted pangolin trade in African and Asian cultures and raise awareness of such unattractive issues. The risk managers have the often devastating job of seizing pangolin bodies from poachers, usually in extremely large quantities. Recently, on April 10th, 2019 the Washington Post reported on hundreds of bags of pangolin scales that were confiscated from a shipment headed to Vietnam from Nigeria, weighing over fourteen tons in total- roughly 36,000 pangolins (Thebault). This issue has become international, involving activists, conservationists, politicians, tribal groups, government agencies, and more from countries all around the world, all for an obscure mammal most people have never heard of before