Here in the United States, we are very isolated from the issue of pangolin trafficking, with a large majority of the population unaware of the situation occurring throughout Africa and Asia. In 2017, Scientific American wrote an article on the United States’ current role in pangolin conservation (Pepper). With somewhere around thirty captive pangolins in the country among six zoos, the United States boasts of their leadership in conservation. Pangolin experts, who met in Washington D.C. in May of 2017 claim this is not conservation, but rather ignorantly promoting the sale of wild-caught pangolins, which have devastatingly low survival rates when transferred into captive life (Pepper). These zoos have formed a “Pangolin Consortium,” which includes the non-profit Pangolin Conservation, to work to bring pangolins to the United States to research them, because it is difficult to observe them in their natural habitat (Pittsburgh Zoo). While there is clearly an effort among these zoos to promote education on the threats faced by pangolin populations, these efforts are misguided because the pangolins can hardly stay alive for six months in captivity, let alone reproduce to save the species from extinction (Pepper). Changes in the methodology and practices used to convey this information need to be reformed to make a truly impactful difference. 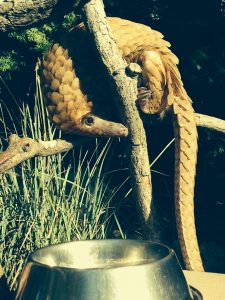 A pangolin in the San Diego Zoo from: https://popanaheim.files.wordpress.com/2014/01/1.jpg

As a country with ample educational and economic resources to raise awareness of international issues such as this, our role has been minimal. Outside of zoos and pangolin expert conventions, information has not been made available to the general public. Our social geography has limited us to tangible problems that have direct effects on us, such as homelessness and poverty which have constant media attention. The majority of the United States could not identify a pangolin, let alone have the ability to understand the seriousness of the issue and spread the information capable of starting a movement for change. Social media has revolutionized the concept of social geography, created connections between people all over the country and abroad, providing access to news stories, protests, and campaigns for getting involved. The opportunity for conversations about pangolin trafficking is present, but Americans do not even know there is a topic to be discussed. Major news outlets, conservation advocates, and even celebrities who are well-connected to the public via Twitter, Instagram, Facebook, and other medias have the ability to bring light to wildlife trafficking and animal cruelty such as this, and it is their responsibility to shape our social geography.