Spatial Inequality can be introduced in this context as the disproportionate distribution of low/high income communities and the detrimental effects of this (particularly in low income areas). 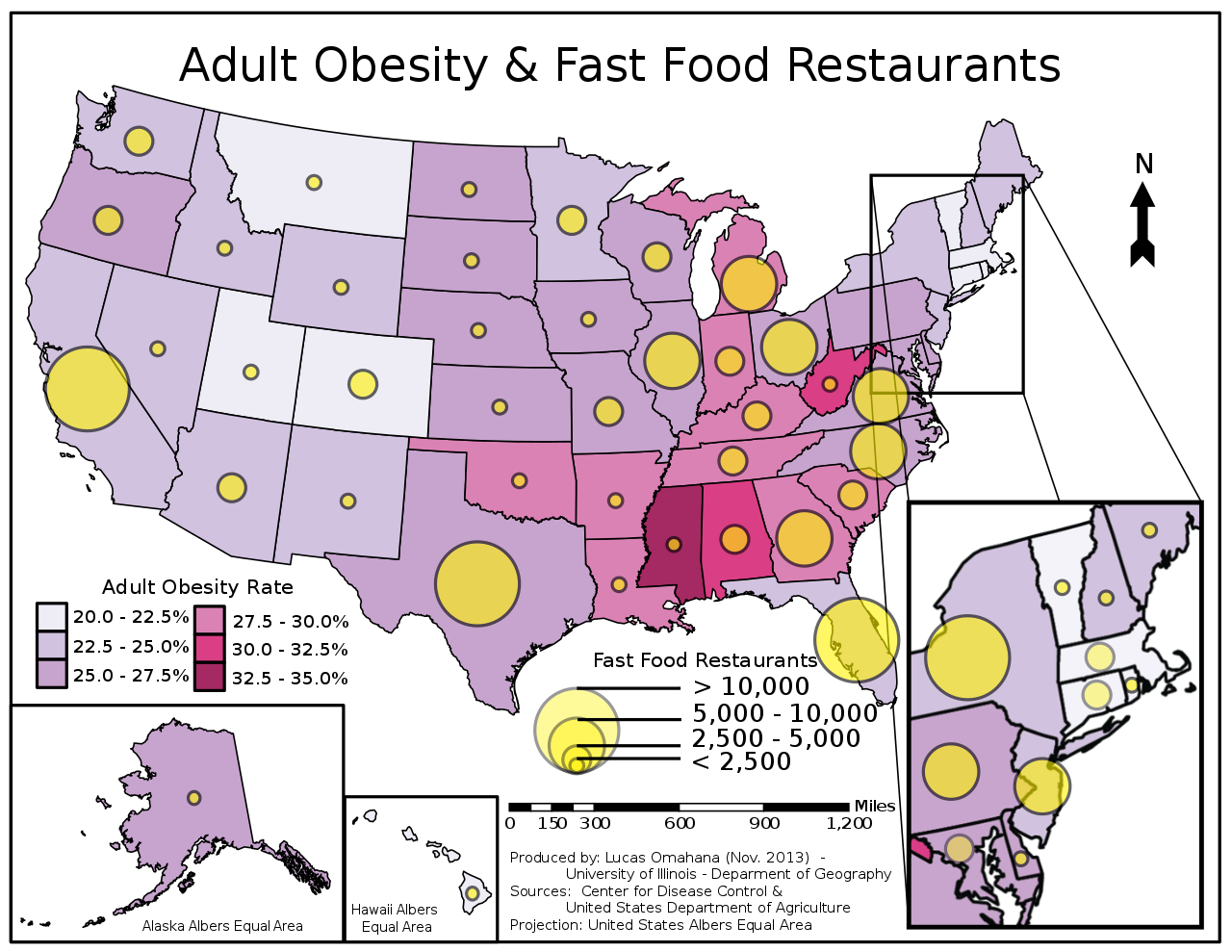 Map of the United States depicting the correlation between adult obesity rates and number of fast food restaurants; standardized percent per state.

Recent studies have begun to show that the level of availability of fast food restaurants in a person’s general or immediate vicinity greatly influenced their eating habits (Oexle). Due to these studies, it has been found that an increased amount of fast food restaurants near you would increase your weekly intake of fast food. These foods are very commonly associated with obesity and diabetes in adolescents, which makes it an important topic to study. The Unfair Burden is placed on consumers in areas with a high frequency of fast food distribution. The social geography of low income communities constrains the options of affordable, healthy food choices. It is a silent killer too; most Americans are totally unaware that the number of fast food restaurants in their immediate vicinity greatly influences their annual intake. It is hypothesized that with a large amount of fast food restaurants, your intake will increase unknowingly (Oexle). Increased consumption can lead to increased cases of obesity and diabetes. Furthermore, studies have shown that interventions to limit fast food consumption in areas with increased vendors are not successful in deterring customers (Oexle).

A study conducted on the American food gap was aimed at obesity disparities in poor or minority neighborhoods being caused by disproportionate access to unhealthy food options. It was measured to see if fast food access was greater in areas that are poor or minority centered. The outcome of these studies brought light to the detrimental effects of wage gaps. They measured from the centers of census blocks with multiple different racial and income criteria. There is an extremely disproportionate level of fast food availability in these areas (James).

The quality of food and service is different compared to wealthier neighborhoods in America (James). It is specifically noted that they determined individuals of black race and lower income are suffering a disproportionate burden concerning the access of unhealthy food choices. The lack of healthy food options and the prevalence of unhealthy ones in these areas are known as Food Swamps & Food Deserts; and they are becoming a social justice issue in the United States.