The environmental film industry is a significant contributor to air pollution, greenhouse gas emissions, and energy consumption (Corbett, C. 1). The main environmental impact is energy, which tends to be invisible, or outside of their cognized environment, but due to the shear size of the film industry it becomes a significant compounding factor (Corbett, C. 19). As we cannot see the damage caused by our constant energy use, we do not understand, and sometimes don’t believe the impact that it is having on the world around us. A large contributor to the total carbon dioxide emission of a film production is the long and multiple flights that members of the production have to take to reach their production site (Tuff, 37). Many members of the film crew need to fly in and out of the site multiple times throughout production, which compounds the amount of carbon dioxide emission the film has. The environmental film industry, like most industries today, is powered by fossil fuel (Bozak 59). Fossil fuels are used to power many things on the set, like transportation or light sources, and in the production of the technology used to record and capture the film (Bozak 59).

The film industry contributes to another significant environmental problem by generating large amounts of waste. A common source of waste is the food and water bottle waste that accumulates over the course of film production (Bailey, Greenlit). Another more unexpected example are tires on automobiles used for transportation to and from the set, for example, will get significant use during film production and the waste only compounds when the waste of all individuals from every project are compiled (Corbett, C. 19). 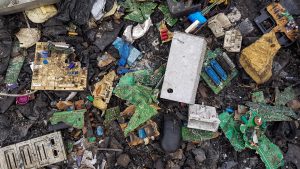 In the movie, Terra Blight, the growing issue of electronic waste is brought to light. Electronic waste is said to be recycled in the United States, but in reality it is brought to foreign countries and illegally dumped (Brown, Terra Blight). At the dumping site, local children scavenge for metal that can be repurposed (Brown, Terra Blight). This is an example of slow violence because the computer and television screens are broken and then they leach lead into the water, which is carcinogenic and creates serious health problems for individuals that drink contaminated water (Brown, Terra Blight). Slow violence is very dangerous because the impact is not immediate and builds over time, so many people ignore or are unaware about the dangers of what can happen in the future.

Environmental films written and directed by scientists often present information that is too detailed and complex for the general population to understand (Agrawal). The scientific background for these films is typically written by scientists that are having trouble finding research positions, want to communicate their work to a larger audience, or they desire the diversity of activities which provide more immediate gratification (Agrawal). The scientists creating these films may have ulterior motives and their work needs to be evaluated by the viewers to determine if they are effectively delivering the messages they are trying to communicate. However, many scientists turned filmmakers have to adjust their scientific expectations when producing a film because most films do not include all of the in-depth scientific research (Agrawal). In order to produce a successful environmental film, scientists need to balance the depth of their research with information that the general population can easily understand.