Pesticide Use in Farming

In order to keep up with the demands of consumerism culture, many farmers have turned to pesticides. In fact, in 1999 over 1 billion pounds of pesticides were applied in the United States alone and 5.6 billion pounds worldwide. Pesticides are any substances used to prevent, destroy, repel or mitigate any pest including insects, animals, weeds, or even microorganisms (Alavanja et al., 157). Examples of pesticides include insecticides, fungicides, herbicides, rodenticides, and plant growth regulators (Aktar et al., 1). 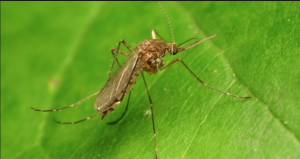 Image of a mosquito, an insect known to carry diseases such as malaria which can be transmitted to livestock. Source: climate central.org

Pesticides have many benefits which keeps them so prominent in the agricultural industry, despite much backlash. One advantage is its ability to improve productivity and increase outputs. One case study found that farmers in India were able to increase grain production four-fold in less than 50 years after starting to use pesticides. Similarly, wheat and corn yields have increased in the United Kingdom and United States, respectively. Pesticides also protect farmers from crop losses and yield reduction due to weeds, diseases, and insect pests that can decrease the amount of harvestable produce. Without the help from pesticides, farmers could experience considerable economic loss from destroyed crops. Vector-borne disease control is another benefit of pesticides because they stop the disease at the source. This not only includes diseases that can wipe out plant and livestock populations, but also diseases that affect humans like malaria and typhus. Overall population health has also been found to increase due to the higher quality of foods available to people. Diets containing fresh fruits and vegetables have been shown to outweigh the possible risks from consuming pesticide residue left on the produce because they reduce the risk of high blood pressure, heart disease, diabetes, stroke, cancers, and other chronic diseases (Aktar et al., 2). Researchers have also identified secondary benefits of pesticides which can include anything from using money saved in product yield for education and medical care to fitter people to increased biodiversity (Aktar et al., 1). 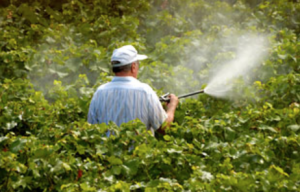 Unfortunately, many of the pesticides used in farming eventually end up in the human body. There are two main routes of exposure: direct and indirect. Direct exposure occurs in people who personally apply, use, or create the pesticides in an agricultural, occupational, or residential setting while indirect exposure can occur through consuming contaminated water, food, air, or through dust (Alavanja et al., 157). Occupational exposure often occurs to agricultural workers, pesticide industry workers, and exterminators. Workers who mix, load, transport, and apply formulated pesticides are normally among those that receive the highest exposure to pesticides. This type of direct exposure can occur through accidental spills of chemicals, leakages, faulty spraying equipment, airborne dust articles, improper use or application of pesticides, or not following safety procedures. The general public is exposed to pesticides indirectly or from applying pesticides at home. Water, soil, and air contamination can occur from leaching, runoff, or spray drift. At-home pesticides can leave residue on clothes, surfaces, bedding, and other equipment even when directions and safety procedures are properly followed. Certain weather conditions can also lead to higher instances of human exposure. For example, high winds can cause higher spray drift while high heat can cause pesticide sprays to evaporate faster (Damalas and Eleftherohorinos, 1406).