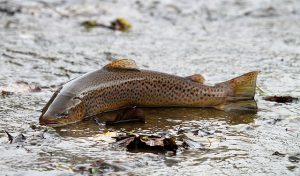 The expansion of agricultural lands has spread widely as humans have been making changes to the natural environment. Over the last 280 years, the total area of cultivated land increased 466%, the rate of expansion has slowed, and dramatic increases in yields have out-paced global human population growth (Matson et al 1997). Scientific and technological advancements have made management of land already under agriculture highly successful through the use of high-yielding crop varieties, chemical fertilizers and pesticides, irrigation, and mechanization (Matson et al 1997). Although human health is a primary concern for regulations, understanding the impacts of pesticides on wildlife is also important for regulation and manufacturing (Kendall and Smith 2003).

This agroecosystem has a large influence on many wildlife populations and the movement and use they have towards natural and agricultural systems (Matson et al 1997). For example, the perennial, a vegetationally diverse agroecosystem with a complex structure provides homes for many aviary species that are usually found in undisturbed ecosystems (Matson et al. 1997). Furthermore, agricultural lands that experience irrigation in arid and semi arid regions are becoming degraded due to salinization and waterlogging, where irrigation return-flows carry more salt and minerals than the surface or groundwater source supplied to it, which in return impacts or damages downstream agricultural and natural systems, such as fish and wildlife populations (Matson et al 1997).

These effects from pesticides on wildlife led to congress passing the Federal Insecticide, Fungicide, and Rodenticide Act (FIFRA) in 1972 in order to deal with pesticide registration, efficacy, and use under the jurisdiction of the US Department of Agriculture in order to determine “unreasonable risks” towards people, the environment, and wildlife (Kendall and Smith 2003). Other acts such as the Toxic Substance Control Act of 1976 and the Comprehensive Environmental Response, Compensation and Liability Act of 1980 have assisted in government control of chemicals, where they are being released into nature, and the impacts it may have on wildlife populations (Kendall and Smith 2003).

Overtime, technological advances have provided tools for determining physiological changes in wildlife in response to pollutants and toxins in the environment. This includes polymerase chain reaction, DNA fingerprinting, cDNA microar-rays, and other molecular techniques that can provide detailed information of the impact of chemicals and allows contaminant studies and the effects it has on wildlife at a multitude of levels ranging from molecular, cellular, organ system, individual, population, or an entire ecosystem.