Dependency on the Agricultural Industry 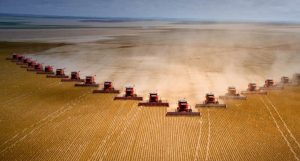 In the early 20th century, the politics surrounding agriculture were balanced on varying different political interest including the railroads and major grain companies, which worked with a variety of industries to keep food prices low (Thompson 2001). These industries had a stake in the game since the railroad industry profited off the shipping of the grain and factory owners wanted low food prices to supply their low-wage employees (Thompson 2001). These perspectives pushed the idea that agriculture was just another industry. Making higher abundances of food at lower costs and prices led to the industrialization of farming and the new use of machinery, despite any negative impacts (Thompson 2001). This change affected many farmers who lost their farms and therefore to many workers who lost their jobs in the process, as well as the wellbeing of the environment (Thompson 2001). The sad truth is that agricultural systems which allow for production of low cost food, also tend to have serious impacts on the environment. Additionally, this mindset can also be directly associated with resourcism.

The concept of resourcism, which is simply the view that environmental resources are to be used as needed by society without regard to sustainability and environmental wellbeing, fuels cultural values which push people to continue to consume more and more goods (Farrell 2011). Consumer culture is constantly changing as it is influenced by by the media, including movies, television shows, advertisements, social media, and celebrities (Arnould and Thompson, 2005). This, combined with the fact that American culture values fashion, cheapness, comfort, convenience, and novelty- all of which result in the continuous consumption of new products (Farrell 2011). How does consumer culture relate to agriculture? The majority of the products which are continually consumed and replaced, originate from agricultural products. The excessive demand for these agricultural products is a large part of what continues to push the increase in support of large scale farming in the 21st century.